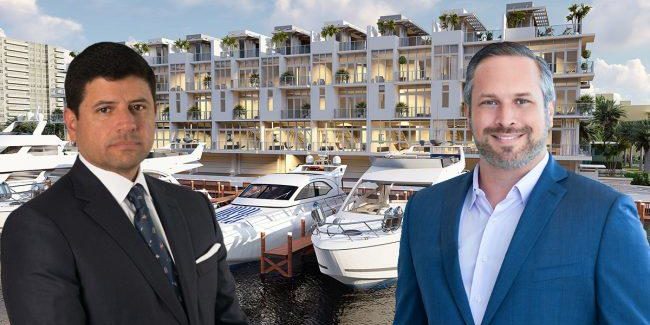 Jesus Quintero and Phil Gutman, with a rendering of Quint Hollywood

JQ Group hired Brown Harris Stevens Miami to take over sales and marketing of a luxury townhome project under construction in Hollywood.

The Miami-based developer previously handled sales in-house of Quint Collection, a 10-unit waterfront project at 2800 North Ocean Drive. None of the units have been presold yet. Rubin Glanz will now lead sales, overseen by Phil Gutman, president of Brown Harris Stevens Miami, according to a press release.

The project, north of Margaritaville’s Hollywood Beach resort, includes a marina with 12 boat slips on the Intracoastal Waterway. Units range from 4,650 square feet to 5,137 square feet, with four stories of living space, a fifth-floor rooftop, and three bedrooms. Kaller Architecture is designing the project and QR General Contractor is the construction firm. It’s expected to be completed in the second quarter of next year.

Units start at nearly $2.6 million and do not include boat slips. Spazio Di Casa designed a model home that includes Roche Bobois furniture, asking $3.3 million. The units all feature 10-foot ceilings, balconies that are up to 10 feet deep, terraces with summer kitchens and hot tubs, a two-car garage and a master suite on the fourth floor.

JQ Group of Companies, led by Jesús Quintero, has partnered with other developers on projects that include Midtown Doral and Centro in downtown Miami.